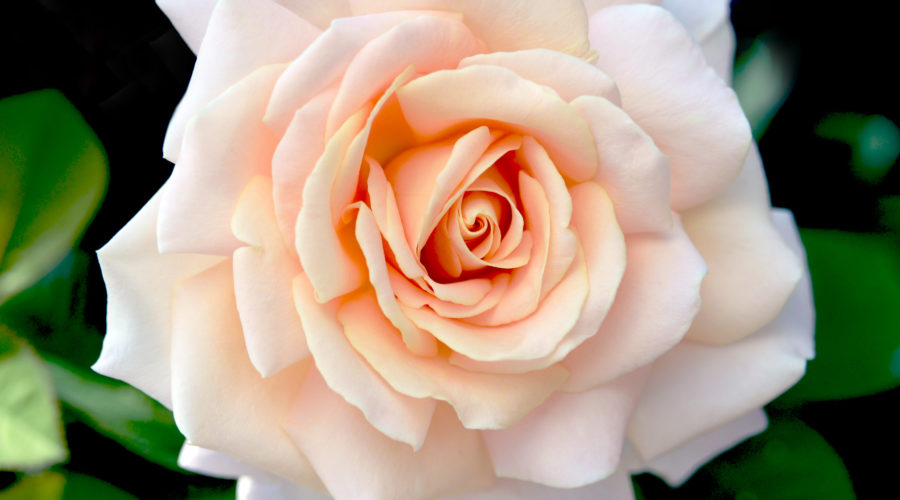 Rosa Jardins de Bagatelle was bred by Marie-Louise Meilland of France in 1987 and later introduced in the United States by Conard-Pyle Co. in 1989. This highly perfumed hybrid tea rose is a stunning blend of cream and pink with apricot undertones that grows profusely on a slightly spreading, medium bush. It is simply a gorgeous and richly perfumed rose that would be asset to anyone’s garden.

Named for the gardens of Bagatelle in Paris, The Parc de Bagatelle was originally established in 1775 on a bet between Queen Marie Antoinette and her brother-in-law, the Count of Artois, that a palace and garden could not be built within three months. The Count completed the project in just 64 days, wrapping things up in November of 1775 and winning his wager with the Queen.  In 1905 the park was purchased by the city of Paris and a rose garden boasting 10,000 roses was added to the area. The Parc de Bagatelle, magnificent and impressive, is one of four botanical gardens in Paris.  The irony of the term Bagatelle…it is a word meaning something of little importance or value. 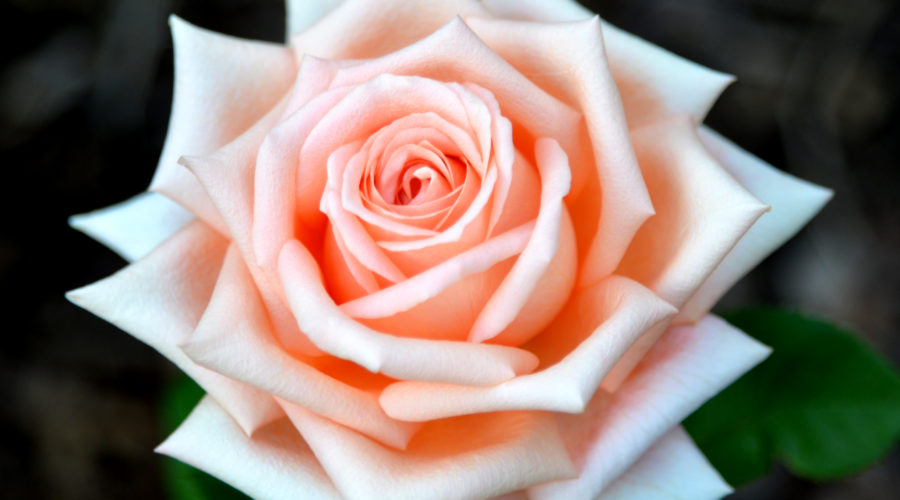 Rosa Lollypop was bred by W. Kordes and Sons of Germany in 2001 for the florist industry. This apricot hybrid tea, classified as an orange pink, produces stunning blooms. As a seedling of Rosas Dream x Peach Melba, this hard-to-find rose is fully double, its many petals beginning to quill as the blossom ages. It holds its classic form beautifully, making this a great garden rose growing on a well-formed, medium bush. And because each bloom opens atop long straight stems, she is also a contender for the show table.

Lollipops, (candy on a stick) probably date back thousands of years when cave people collected honey from beehives with a stick. Not wasting anything back then, they probably licked the stick, thus inventing the world’s first lollipop! In the 17th century, the English enjoyed boiled sugar candy treats, inserting sticks into them to make them easier to eat. During the Civil War era, hard candy was put on the tips of pencils for children to eat.

With the 20th century being the era of automation, the lollipop as we know it today began to take form. Several candy companies were creating hard candy on a stick, but it wasn’t until October of 1931 that George Smith, owner of a confectionary company called the Bradley Smith Company, took credit for inventing the modern version of the lollipop. He trademarked the term lollipop, borrowing the name from a famous race horse named Lolly Pop. According to linguists, the term ‘lolly pop’ means quite literally ‘tongue slap’. And so, Rosa Lollypop was chosen for October’s Rose of Month to commemorate the official trademark for “candy on a stick”! 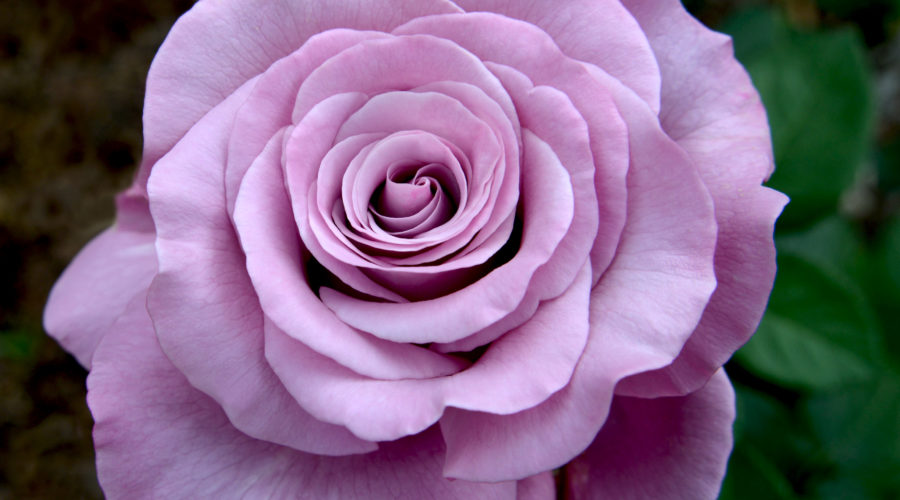 Rosa Neptune was bred by Tom Carruth in 2003 and later introduced in the United States by Weeks Wholesale Rose Grower, Inc. in 2005. Classified as a mauve hybrid tea, this beauty is probably one of the best lavender roses in commerce to date. Growing on a tall, slightly spreading bush, each classically shaped bloom holds its form, making it not only a stunning garden rose, but a candidate for the show table, as well. Originating from a cross between the roses (Blueberry Hill x Stephen’s Big Purple) x Blue Nile, this lovely specimen boasts shades of lavender with purple edging and a deliciously strong citrus rose fragrance. Save a spot in your garden for this one.

Mauve roses are the closest thing we have to “blue” roses, so no surprise when this pretty thing was named for the closest thing we have to a “blue” planet: Neptune. Rosa Neptune was chosen for September’s Rose of the Month to commemorate the discovery of planet Neptune on September 23, 1846 by German astronomer Johann Gottfried Galle, who first observed the planet based on the mathematical calculations of French astronomer, Le Verrier. As the 8th planet from the sun and the 4th largest in diameter of all the planets in our solar system, Neptune’s atmosphere is composed of hydrogen, helium, and some methane. The methane absorbs red light which makes the planet appear blue. Named for the Roman Mythological god of the sea, Neptune has 14 moons, the largest of these named Triton, and hosts the coldest environment in our solar system. 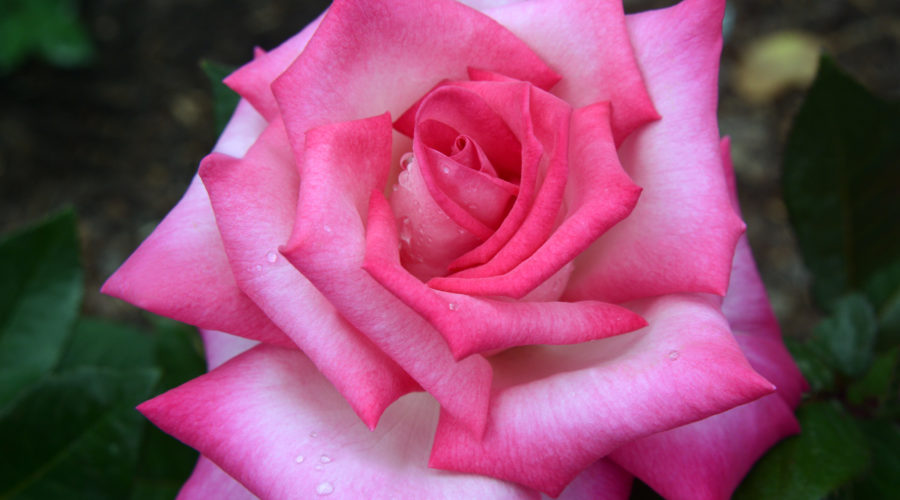 Rosa Signature was bred by Dr. Keith W. Zary before 1995 and was later introduced in the U.S. by Bear Creek Gardens, Inc. in 1996. A cross between the two varieties Honor and First Federal’s Renaissance, this stunning hybrid tea rose produces high centered pink flowers suffused the darker pink petal edges that bloom on a medium sized bush. Mildly fragrant, this show stopper is a standout in the garden as well as on the show table. It is a truly beautiful rose!

John Hancock is remembered for his large and stylish signature on the Declaration of Independence, so much so that the term “John Hancock” has become a synonym in the U.S. for one’s “signature”. Therefore, Rosa Signature was chosen as the Rose of the Month for July to commemorate the ratification of the Declaration of Independence on July 4, 1776 displaying the signatures of some of the most famous men that have lived during the history of the United States; our founding fathers. 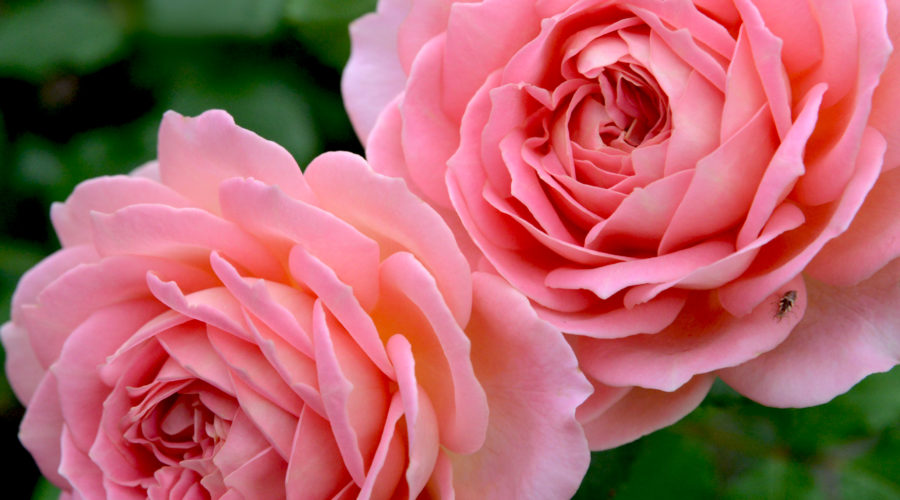 Rosa Jubilee Celebration was bred by David C. H. Austin in 1998 and later introduced in the U.K. in 2002. This lovely English shrub rose blooms profusely on a medium sized bush displaying heavily petaled flowers of salmon pink with a yellow reverse. A stunning garden rose, or one for the exhibitor’s table, this beautiful rose with its lemony-raspberry fragrance is a welcome addition to anyone’s collection.

This beauty was named for the Golden Jubilee Celebration of Queen Elizabeth II, marking the 50 year anniversary of her accession to the throne upon the death of her father, King George VI on February 6, 1952. It was chosen as June’s Rose of the Month to commemorate the string of events celebrated in London during June of 2002 to honor Queen Elizabeth’s service as the longest reigning monarch, to date. 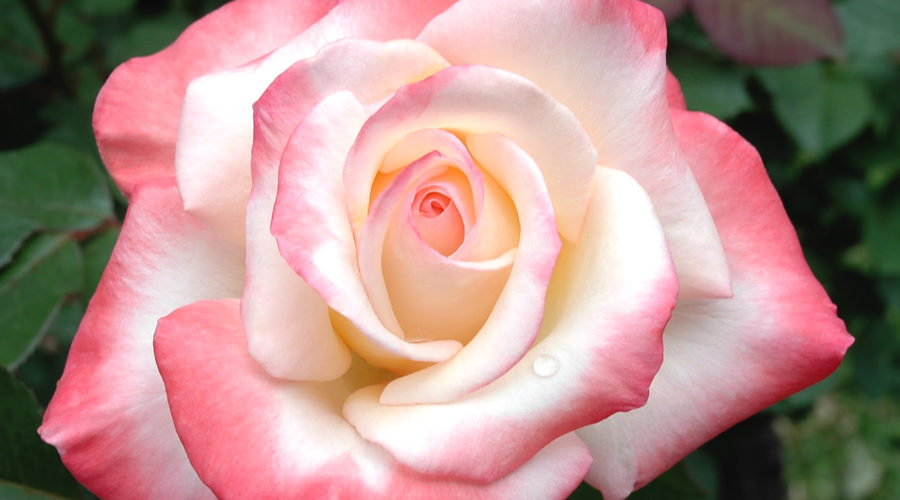 Rosa Gemini was bred by Dr. Keith W. Zary in 1991 and later introduced into the United States by Bear Creek Gardens, Inc. in 1999. The mildly fragrant hybrid tea blooms of this outstanding rose are cream, blushed with a deep coral pink. A cross between the varieties Anne Morrow Lindbergh and New Year this beauty produces loads of classically formed exhibition roses with high centers and long stems; a stunning and consistent winner on the show table for many years.

Because Gemini, the third astrological sign of the Zodiac, occurs between May 21 and June 21, this stellar rose was chosen as the rose of the month for May. The name “Gemini” is Latin for twins and is associated with the twin brothers Castor and Pollux in Greek Mythology, known together as the Dioscuri. Their mother was Leda, but Castor was the mortal son of Tyndareus and Pollux the divine son of Zeus. When Castor was killed, Pollux asked his father, Zeus, to let him share his own immortality with his brother to keep them together and they were transformed into the constellation of Gemini. 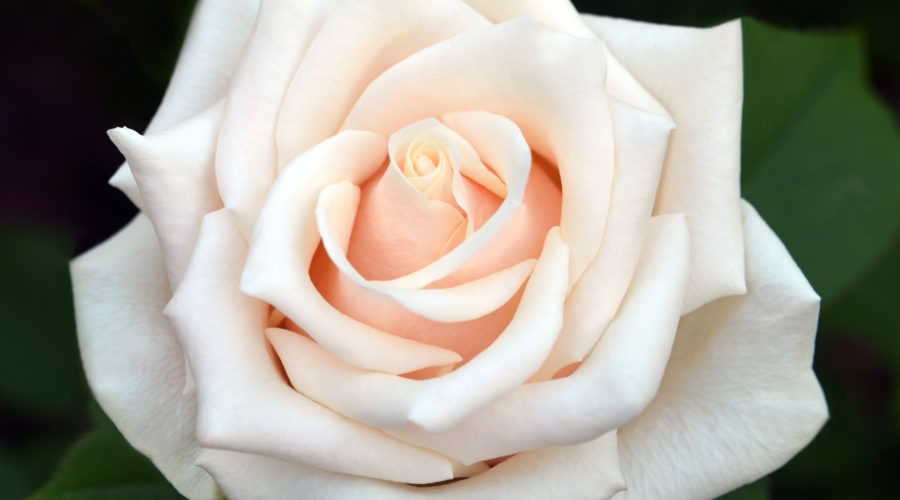 Rosa King Kong was hybridized by Lex Voorn of the Netherlands for the florist industry. The medium sized bush of this stunning hybrid tea rose yields classically formed blooms with dusty pink centers that fade into creamy, ivory colored outer petals. Always in bloom, the flowers of this specimen, growing on long straight stems, consistently open as high centered exhibition blooms ready for the show table. What this rose lacks in fragrance, it makes up for as the perfectly formed garden rose.

Rosa King Kong was chosen as the rose of the month for March to celebrate the release date of the ever popular monster movie “King Kong” which first hit the theaters on March 2, 1933 in New York City. Ranked as the greatest horror film of all time, the movie tells the story of a film crew that goes to a tropical island for an exotic location shoot and discovers a colossal ape who takes a shine to their female blonde star, played by actress Fay Wray. The ape is then captured and brought back to New York City for public exhibition. Dubbed “Kong” he escapes from his captors, takes the beautiful young woman hostage, and carries her to the top of the Empire State Building where he finally meets his demise. 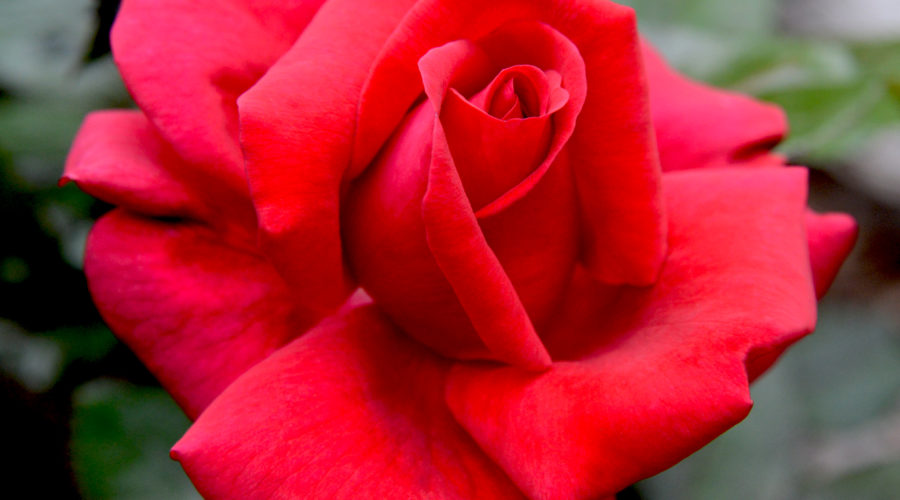 Rosa Lasting Love was bred by Michel Adam of France in 1993 and introduced into the United States by Weeks Wholesale Rose Growers in 2005. A cross between Colour Wonder x Manou Meilland, this high centered, velvety red, hybrid tea is intoxicatingly perfumed. It’s neatly compacted medium sized bush grows upright and is heat tolerant. This beauty is a standout in the garden as well as a contender on the show table.

Because we think about and celebrate those we love in February on Valentine’s Day, Rosa Lasting Love was chosen as February’s Rose of the Month not only because of its name but because red roses are symbolic of love. 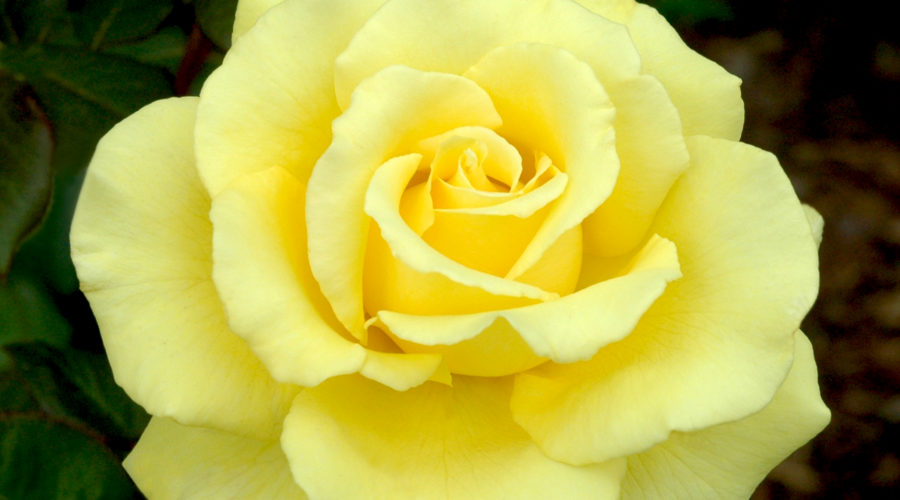 Rosa Lanvin was bred by Jack E. Christensen in 1986, a cross between an unnamed seedling and rosa Katherine Loker. The blooms of this lovely, soft yellow, hybrid tea appear on long, tall stems of a medium, bushy, upright plant. The petals of this specimen are often veined and crisp, forming a stunning and long lasting, heat tolerant bloom that makes a statement in the garden and is also a contender for the show table.

Named for the Parisian Couturier, Jeanne Lanvin, this yellow beauty was chosen for January’s Rose of the Month to celebrate her birth date of January 1, 1867.

Having always been interested in fashion and originally a milliner, Jeanne Lanvin began making such beautiful clothes for her only daughter, Marie-Blanche de Polignac that they began to attract the attention of a number of wealthy people who requested copies for their own children. Soon, Lanvin was making dresses for the mothers, and some of the most famous names in Europe. As her reputation grew, Jeanne Lanvin abandoned millinery and concentrated on the creation and sale of high fashion clothing, thus establishing the “House of Lanvin” in 1889. It remains the oldest fashion house in the world and after the death of Jeanne in 1946, the business remained under the control of the Lanvin family until 1990 when it was taken over by others.

The logo of “Lanvin” was inspired by a photograph taken for Jeanne Lanvin as she attended a ball with her daughter wearing matching outfits in 1907. 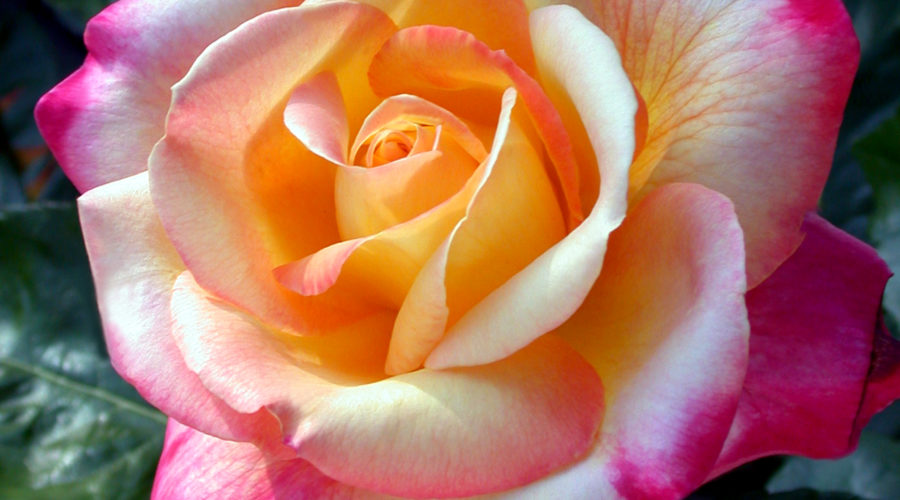 Rosa Love & Peace was hybridized by Ping Lim and Jerry F. Twomey in 1991 and in 2002 is was introduced in the U.S. by Bailey Nurseries. The mildly fragrant blooms of this cheery hybrid tea are a bright yellow with cerise pink petal edges with no two flowers exactly alike in coloration. Growing on an upright, medium sized bush, this beauty is a great repeat bloomer and often the first to bloom during the spring flush.

Love & Peace was chosen to be December’s Rose of the Month for its name. During this month when we celebrate the holidays, for many the focus of the season lies on the importance of promoting peace in the world and sharing in the love of our faith and those we hold closest to us.

Type and press Enter to search